“Remember those Economist ads? Can we try to do something like that?”

As a copywriter, Abhinav Ullal has heard those words (or something similar) in boardrooms, briefings and brainstorming sessions. And for good reason. The ‘White out of red’ ads were simple, witty and memorable. They were created by the ad legend David Abbott and his creative team. Now, Abhi unpicks the brains behind the ads via ‘David Abbott Said’ – a series of short, insightful interviews with the man himself.

Launched four years after his untimely death, the website brings Abbott’s thoughts and insights back to life. In each clip, he’s charming and articulate—reminding us of the power of great advertising. He takes us through his favourite pieces of work and how he sold them to clients. He talks about the agencies he built and tells us why he thinks awards are good.

We’re all about simple ideas here at AML. And Abbott’s work is filled with them. So I thought I’d show you some of my favourites. (Picking them wasn’t easy.)

First up, the first-ever Economist ad.

Inspired by the red masthead on the magazine’s logo, Abbott created a simple poster that was amusing, intelligent and charming. It summarised The Economist brand without a visual, a tagline or body copy.

Abbott explains, “What is potentially a banal positioning line — ‘read this and be successful’ — is made acceptable and convincing by wit and charm. Things you can’t say literally can often be said laterally.” The wit, charm and simplicity set the tone for the rest of the campaign.

The second ad is for the RSPCA. Here, Abbott turns a simple fact into an alarming, attention-grabbing headline.

Next, Volvo. Simple thought, executed boldly. The ad is also a timely reminder for our industry. If our ads aren’t brave enough, the sword will fall on us.

Here’s another iconic piece. Abbott’s brief was to remind people that Yellow Pages existed for the nice things in life too, not just emergencies and domestic disasters.

I’ll leave you with one more Economist ad. It makes me smile every time I see it. As Abbott says, “If something moves you, chances are, it will touch someone else, too.” 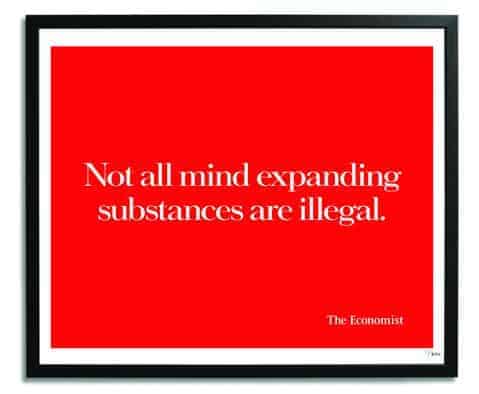