AML Group, in partnership with Stink Films, has created a TV, OOH, print, radio and social campaign for leading charity, Heart Research UK to build awareness of heart disease in women – and ultimately save lives.

The brainchild of AML ECD, Hugo Bone, the campaign, with voiceovers by Jodie Whittaker and Mark Strong, features stark, uncompromising imagery and filmic tropes typically associated with male heart disease that are subverted to deliver a shocking twist. 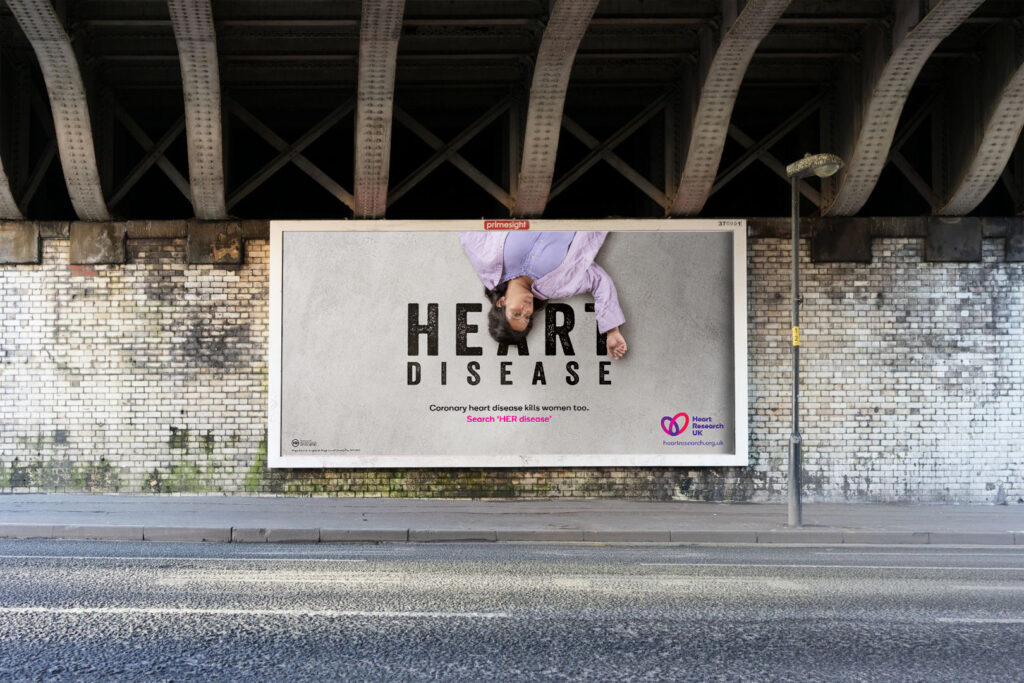 An overweight middle-aged man in a busy cafe is tucking into a fried breakfast when he starts to exhibit signs of discomfort. He’s grimacing, rubbing his chest – typical signs of an approaching heart attack. However when the attack happens, it is the waitress who, while pouring his tea, falls to the floor. As the camera pans out, we see her prone body lying over a graphic of the phrase ‘Heart Disease’ – but as her head and left hand are covering the letters ‘a’ and ‘t’, it instead reads ‘HER Disease’.

Says Hugo Bone, “heart disease kills 23,000 women in the UK every year – a truly shocking statistic. But just as shocking is that so few women know that. By reducing this message down to just two words, making it super simple, we hope to close the awareness gap forever – and save lives.”

This campaign has been made possible by some incredible pro bono partnerships. The commercial was directed by Ben Nakamura Whitehouse through Stink Films. Sound design was by Nick Angell and the stills were shot by Ester Keate through Boutique Artists. The agency producer was Ivana Dzaferovic through Ink Creative.

Commenting on the campaign, Kate Bratt-Farrar, Chief Executive Officer at Heart Research UK says: “This is a powerful campaign with a message that we all need to hear. Heart disease affects many women, and our role is to inform and to help women understand the signs and symptoms and to take action if something doesn’t feel right. We are immensely proud of this campaign – a brilliantly bold image that stays with you, a real call to action.”

If you’d like to support Heart Research UK’s vital work into the prevention, treatment and cure of heart disease, please visit www.heartresearch.org.uk for inspiration on how you could help.

And make sure you check out our case study here.